January’s birthstone, garnet, is generally associated with the color red. But did you know garnets also come in orange, green, brown, and other colors?

Garnets are actually a group of gems with similar, but slightly differing chemical formulas.  The generic formula is A2B3(SiO4) where A is calcium, magnesium, iron or manganese (Ca, Mg, Fe, Mn) and B is aluminum, iron or chromium (Al, Fe,Cr). The different combinations of elements create the different species of garnet (listed below with their common colors). Color can be a very helpful diagnostic feature when identifying some (but not all) gems.  For instance, spessartine garnet must always have an orange color component. 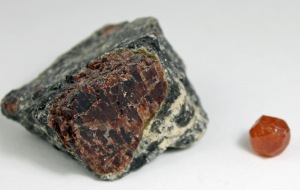 Because of the range of chemical formulas possible, garnets may also be mixes of more than one species.  In addition, some species have subspecies (called varieties).  Some examples are Demantoid (a variety of Andradite) and Hessonite (a variety of Grossular)

Some garnets also display “phenomena” such as stars, cat’s eye, and color-change due to features of that stone that affect how light is reflected and/or transmitted.

and comes in colors to please almost everyone! 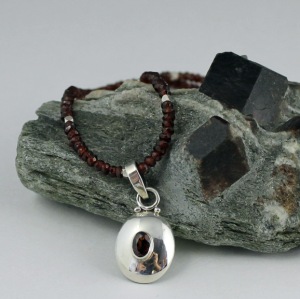