Pure beryl (Be3Al2Si6O18) is colorless and is known as “goshenite“.  Beryl is a gem species; the addition of trace elements can result in one of its many varieties including:

Emerald – May’s birthstone is colored by chromium or vanadium and is the most valuable of the beryls.  Emeralds are medium to dark bluish-green to yellowish-green.  Light colored gems are referred to simply as “green beryl“.  Emeralds commonly have many inclusions and fractures so large gems are uncommon.  Most commercially mined emeralds come from Colombia, Zambia, Brazil, and Zimbabwe.  Emeralds can be found in the United States in North Carolina. 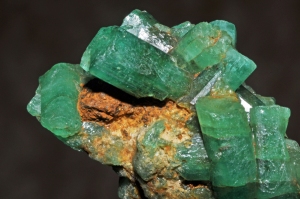 Aquamarine – March’s birthstone gets its blue color from iron.  Aquamarines are light blue-green; medium to dark blue gems are known as “maxixe beryl“.   Large clean aquamarine gems are common.  Aquamarine is mined in Brazil, Nigeria, Zambia, Mozambique, Madagascar, Pakistan, and Vietnam.  In the United States, aquamarine can be found in Colorado, Idaho, and Wyoming.

Morganite -Manganese gives morganite its pink to peach color.  This lesser known beryl has been gaining in popularity in recent years.  It was discovered in 1910 in Madagascar and was named for the financier J.P. Morgan.  The gem is also found in Brazil, Afghanistan and Mozambique.  Morganite has been found in California and Maine in the United States.

Heliodor (also Golden or Yellow Beryl) – Heliodor is generally considered a collectors gemstone and is not often found in jewelry.  Traces of iron cause the greenish-yellow to orangy-yellow color.

Red Beryl (Bixbite) – Red beryl is quite rare and has been found only relatively small crystal sizes.  Manganese provides the red color which is very saturated in this gem.  It is  found in the United States in Utah and small crystals have also been found in New Mexico.

Of the varieties above, I’ve seen beads made from emerald, aquamarine, morganite, and green beryl.  So now you know beryl!