The quartz and chalcedony gems provide a wide range of beautiful colors and patterns with very good durability. Although they all have the same basic chemical formula, SiO2, different impurities and/or conditions when the minerals form create different end results.

Quartz varieties have crystals that can be seen with an optical microscope (and sometimes with the naked eye). 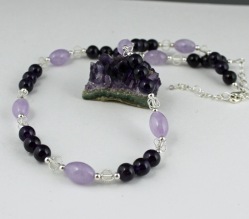 Chalcedony varieties are cryptocrystalline which means that individual crystals cannot be seen, even with the use of an optical microscope.  Chalcedony gems are subdivided into two groups: agate and jasper.

Agate has angular or curved banding. 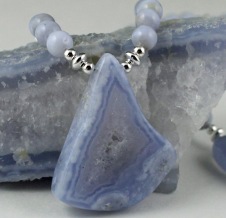 Jasper is a “general variety term for opaque chalcedony of any color or combination of colors except solid black or specially named material” (GIA). 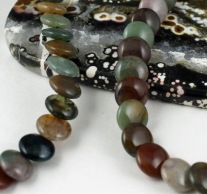 There are also many quartz minerals that are not beautiful or rare enough to be considered gems, such as chert and milky quartz.

With all these beautiful colors and patterns to choose from, there’s a quartz or chalcedony gemstone for everyone! Which is your favorite?

February’s birthstone is amethyst, the purple variety of quartz.

Last month I told you about the many different colors of garnets, which are caused by differences in chemical formula. Pure quartz (chemical formula SiO2) is colorless (and is called “rock crystal” in the jewelry industry). The different colors of quartz* are caused by defects in the crystal structure rather than by a consistent change in the  chemical formula. This often causes different amounts of color within even a single crystal (“color zoning”). For amethyst, iron, and possibly aluminum, impurities are believed to cause the purple color.

Amethyst deposits are found all over the world; many of the large mineral specimens come from Brazil and Uruguay, but other sources for the gem include Russia, Czechoslovakia, Zambia, and the United States. It is not uncommon to find relatively large crystals which makes this a very affordable gem, even in large sizes.